A newly bult meditation retreat centre is being opened as the ‘Lion of Wisdom’ (‘Pannasiha’) Meditation Centre. It has been established in memory of Ven. Madihe Pannsiha Mahanayaka Thera, the founder of the Washington Buddhist Vihara Vihara – the first Theravada Buddhist temple in USA. It was founded in 1965.

The Vihara had been conducting meditation classes regularly but with the increasing interest in mediation, the need to have a quiet, spacious place where devotees can conveniently follow a course was felt. The centre stands on the top of a small hill offering beautiful views from two sides. Built on a land extending over three acres, two of the three levels in the building have been allocated for male and female meditators. More ‘kutis’ are being planned in the years to come.

Once Ven Dhammasiri told me that tension and stress in their lives have led Americans to look towards Buddhist meditation as a form of relaxation. “With only a few holidays, the life of an American revolves round work. Their stress levels are high. So they try to get away at least for an hour or two on Sundays to follow our meditation classes,” he said. “Saying that at one stage the foreigners were more interested in Buddhist philosophy, the accent is now on meditation,” he added.

Ven Dhammasiri has been at the Vihara for thirty years. Having observed his skills in planning and organising activities as well as his ability in administrative work, he was handpicked by Madihe Mahanayaka Thera to function as the secretary of the Washington Buddhist Vihara Society which is an incorporated body. A year later he succeeded Ven Dr Henepola Gunaratana as president and continues in that capacity to date.

Welcome to the website of the Pannasiha, Lion of Wisdom Meditation Center. This rural meditation retreat facility is a branch of the Washington Buddhist Vihara.

It is the purpose of this center to be a refuge from the hustle and bustle of city life and provide access to the slower nature vibrations of the rural countryside conducive to mindfulness meditation practice. There has long been a need for a meditation retreat center not too far from the tri-state metropolitan areas of Washington, Maryland and Northern Virginia. 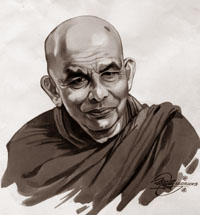